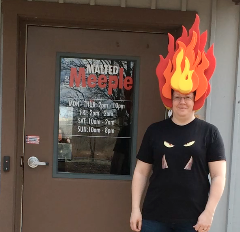 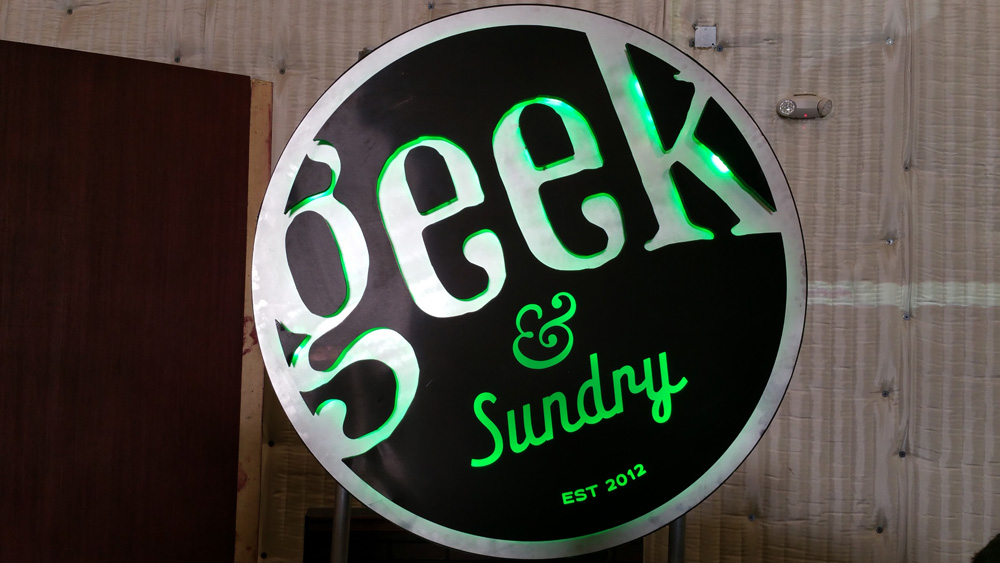 Anne-Marie and Justin took a whirlwind trip to LA to attend the flagship TableTop Day event at Geek & Sundry’s secret Headquarters in Burbank. The day started off early with people lining up to get in. The “secret” headquarters weren’t so secret with giant, inflatable G&S logos everywhere, so it was pretty easy to find. Justin and Anne-Marie got there early and were able to see the place while it was still empty. Geek & Sundry has a pretty sweet soundstage to work with!

Since we were sponsors of TableTop Day, we were given a VIP table where we could show off The Dark Titan. We had help this year from local game gurus, Eric Burgess and Devi Hughes. These two were awesome, running demos and keeping players entertained all day long. We couldn’t have done the event without them! Plus Eric brought famous strawberry donuts from The Donut Man, which of course Justin had to try. Before long, the doors were open and gamers came flooding in! Tables were filled and many games began. People were excited to try The Dark Titan, but a lot of the people that came by the table hadn’t played Castle Panic yet at all. They soon realized they were getting a special treat when the designer of the game taught them how to play! Felica Day kicked things off with a quick speech and was there all day playing games with people and shaking hands. Geek & Sundry had a library where players could check out games, as well as a merchandise booth where you could get a drink or pick up some sweet G&S swag! While Eric and Devi taught some demos, Justin and Anne-Marie went out into the crowd to visit with fans and take in the whole event. We found some Bears! players, and Anne-Marie was able to teach the game to them, but she didn’t get the highest score that game! There was a photo op with a couch and cutout of Felica Day that got a lot of attention that day as well as a Loser’s Couch. Here our buddy Patrick from Crash Games poses with a group of players that were defeated. It was a great time with a great feel to it. Justin took this panorama shot standing in the middle of the soundstage, which kind of gives you a little bit of the feel of the whole thing.

The event was so large, they had to extend it out of the soundstage and into a tented area in the parking lot. And it was NEVER empty. We also encountered a group of Munchkin players diving into the world of Munchkin Panic, so we stopped to talk with them. Once they realized they were talking with the designer of the game, they wanted to get their photo taken with Anne-Marie. It was a lot of fun to meet fans of our games at this event, since so many of them are new to gaming they are very passionate and very excited to meet the creators in person. There were also 3 food trucks at the event providing Hawaiian shaved ice, Japanese-style hotdogs and gourmet grilled cheese. The lines may have been long, but it was worth it. Later in the afternoon, Wil Wheaton arrived and thanked everyone for coming. It’s fun to see how drawn to him people are, and he really does make a great ambassador for gaming. He was running a live stream on Twitch that should be available shortly, and we’ll let you know once we have access to that.

We ran a bunch more demos and made a lot of players happy. Even if Agranok did crush their towers, players still left with smiles on their faces. Eventually though, 6:00 rolled around, and it was time to close down the event. Wil and Felicia gave a very nice closing speech reminding everyone that this hobby brings us all together like nothing else and also pointing out that this year TableTop Day was celebrated on every continent on the planet, including Antarctica! It was really great to be a part of something so big, and we hope everyone had a blast playing games with old friends and new ones. Thanks to everyone that helped organize an event, or just joined one to make it more fun!