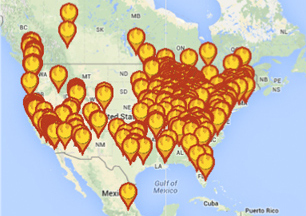 There are many new threats in The Wizard’s Tower box, and they will test your mettle to its limits.

In this video, Justin talks about the new, standard Monsters that join the fight from Centaurs to Ogres, and Imps to Gargoyles.

You will be removing some of the base game Monsters and replacing them with these new Monsters. (See page 3 of The Wizard’s Tower rulebook for the new Monster “recipe.”) Some of these Monsters have special immunities and special vulnerabilities. Some will only spawn alongside other Monsters. Some are just really hard to kill with higher health points than you may be used to!

In the expansion there are even Monsters who fly! You have to use Archer cards to hit these Monsters. Knights and Swordsmen are useless against them. They are also immune to the perils of the Giant Boulder! Justin explains how you fight them in this video.

Last, but certainly not least, are the Mega Boss Monsters. These Monsters are so big, they aren’t just Bosses, they are MEGA! Four- and five-points make these guys tough to kill, plus they come with extra abilities that stay in effect as long as they are alive. They can also move in unpredictable ways, so you’ll need to stay alert to properly strategize their demise. Mega Boss Monsters are covered on pages 13 & 14 of the rulebook. The game also comes with handy reference cards players can easily refer to when a new Monster is drawn.

You can learn more about all the Monsters in the videos shared above, as well as in the rulebook (pages 11-14). Be sure to also check out our FAQ page for specific Monster effect questions and those occasional scenarios that give you pause.

Happy Hunting! May your Wizard’s Tower remain standing & the cards be on your side!

For the complete playlist of The Wizard’s Tower videos, check out our YouTube Channel, or past blog posts.