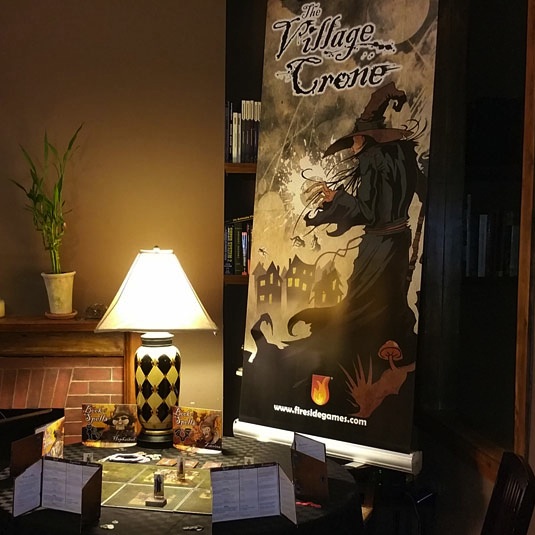 What fun would a game about witches be without spell-casting? Don’t worry, The Village Crone, is chock full of this kind of fun!

You main objective in The Village Crone is to score 13 points first by completing Witch’s Schemes. To do so, you will be sending out your Familiars to harvest Ingredients you need to cast a variety of spells to achieve the objectives on your Witch’s Scheme cards. There are 8 different spell types you can cast, each requiring a different mix of Ingredients and a special incantation. We have provided incantations for you, but you are permitted to make up your own if you are feeling particularly witchy while playing.

Pages 4 & 5 of the rule book go into detail about each spell, giving examples of how they work and how they affect the Villagers, and possibly your Familiars.

Let’s take a look at a specific spell-casting scenario: END_OF_DOCUMENT_TOKEN_TO_BE_REPLACED We’ve recently discussed the importance of using your Familiars to gather the Ingredients you need to cast Spells in The Village Crone. Let’s take a closer look at the Ingredients and how you will be using them.

There are five types of Ingredients: Fire, Flour, Silver, Soil, and Eye of Newt.

Fire is created at the Forge, Flour at the Mill, Silver is found at the Lord’s Manor, and Soil is harvested at the Farm. Eye of Newt is a wild card and can be used in place of any of the other Ingredients to complete your Spells.

Three Eye of Newt cards are shuffled into each of the other Ingredient decks at the beginning of the game. These will be drawn at random during the Harvest phase, so you may or may not end up with one.

Don’t forget to consult your Book of Spells often to remember the Ingredients you will need to be collecting to cast the Spells on your Witch’s Scheme cards. And remember there are multiple ways to achieve some of your Schemes, so get creative and use your resources wisely! Let’s take a look at an example: END_OF_DOCUMENT_TOKEN_TO_BE_REPLACED