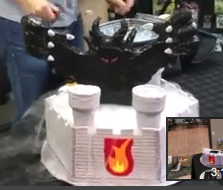 It’s official, The Dark Titan is now available everywhere! Last Saturday, we headed out to local Austin store, Wonko’s to celebrate the release of this highly-anticipated expansion to Castle Panic.

We started up our first few games and then took a brief break to slice up another one of our now famous cakes! Jarred once again went above and beyond by creating a fabulous cake featuring the Dark Titan himself, Agranok, looming out of a Castle-shaped base.  Agranok was chocolate-covered Rice Krispies, and the cake was chocolate with cherry filling. The towers were ice cream cones filled with cake, so the entire thing was edible. To top it off, Jarred placed two small containers in the cake that when filled with dry ice and water caused spooky smoke to flow out over the Castle, just like the cover of the game! After being devoured in his delicious cake form, the Dark Titan came back for revenge in board game form! Game after game saw walls crushed and towers destroyed as players felt the wrath of Agranok! Agranok was defeated in our first game and the Castle survived, but our next game wouldn’t fare so well. Once again our villain showed no mercy to children, as these excited young gamers were about to find out when he made his way into their Castle along with a few Heralds for backup. As the afternoon went on, we started up new games to let players try their hand at the new expansion. Here, Anne-Marie gets a family up to speed before they dive in. In between games, Justin and Anne-Marie signed copies of the base game as well as both expansions. Wonko’s could barely keep up with demand as they sold out of The Wizard’s Tower and The Dark Titan was flying off the shelf! The day ended with many happy gamers going home with new games, promo cards, happy memories, and bellies full of cake. We wish all our fans out there the best of luck in taking on this newest challenge. Here’s to many more successful battles and saved Castles!